On Wednesday evening, around 100 people gathered at the University of Tennessee to protest the building of an oil pipeline in North Dakota. The met at Pedestrian Walkway and walked to paint The Rock, UT’s famous landmark. The event was organized by Gary Newman, a self-described concerned citizen, and the Native American Student Association (NASA).

The Dakota Access Pipeline (DAPL) is a proposed 1,172-mile oil pipeline that would carry crude oil from North Dakota to Southern Illinois. The project was approved in late July, but it has been met with severe opposition by people from around the country since. Critics believe that the pipeline would encroach on the Native American reservation known as Standing Rock and perhaps leak into the soil or even a local watershed, contaminating a water source for many people.

“If this pipeline is built, it will threaten the Standing Rock reservation and everyone in the Missouri watershed,” said Christian Mark King, a tribal leader in NASA and co-organizer of the event.

According to Kimberly Smith, another member of NASA, the goal of the march was to raise awareness for the issue of the pipeline, which may have been helped by another event being held on campus. The pop band Maroon 5 played a concert in Thompson-Boling Arena, causing heavy traffic around campus; but, Smith chose to view the situation as a positive.

“I think the concert was a good thing,” she said. “We were able to market to people that weren’t aware of the issue or weren’t engaged with it.” 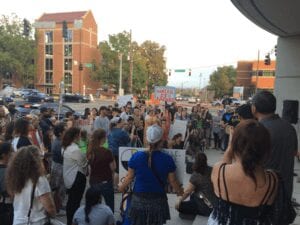 g Native Americans, including the halftime show during UT’s football game against Kentucky on Nov. 12.

While a number of the protestors were NASA members, the march also attracted members of several groups from around the Knoxville community: for example, a Jill Stein supporter used the opportunity to both protest the pipeline and to campaign for his preferred candidate.

A number of members of the Black Lives Matter movement also came to show their support.

“I wanted to be here in solidarity,” David Hayes said. “I think it’s important for us to stand with the natives being mistreated… We have a country that’s built on slavery and oppression, and whenever there are outrageous attacks against oppressed people it is our duty to fight for them.”

Despite the fact that nearly 200 people declared their intention to attend the event on Facebook, Newman estimated the final number of attendees to be around 100.

“I thought more were going to come out,” he said. “but it is what it is. I’m very happy with this crowd.”

Newman was proud that so many people were inspired by him and helped to deliver his message.

“If I can say anything to the water protectors in North Dakota: your fight is our fight. When the people are united, we will never be defeated.”

Quinn is an assistant sports editor for TNJN and a sophomore majoring in Journalism and Electronic Media at the University of Tennesse. When he's not writing, he's probably doing something else. You can follow him on Twitter (@QuinnNotCook) or e-mail him at qpilkey@vols.utk.edu.