A newly popular social media platform has been praised by conservatives, and labeled as a refuge for people to finally speak their minds.

The app, Parler, prides itself on being a place of free speech. The app was released in 2018, but became increasingly popular during and after the 2020 election.

Millions flocked to the app after having their tweets and Facebook posts flagged for violating community guidelines.

Among these millions is President Donald Trump who, according to CNN, had more than a third of his tweets flagged during the election.

Parler has made its way to Knoxville over the past few weeks and has many important people raving about it.

Bill Hagerty, the U.S Senator-elect from Tennessee, confirmed that he is a fan of the app and uses it often.

On a site put up by his media time, Hagerty says “It’s appalling that social media platforms like Twitter and Facebook are censoring conservatives’ voices. No social media channel should be the arbiter of truth.”

Knox County Mayor Glenn Jacobs also confirmed his use of the app, and encouraged fans to follow his account. 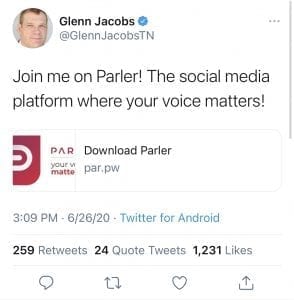 According to a recently published story by WVLT, people are following Knoxville government officials’ lead and joining the app.

Amanda Wilshire was quoted in the story, saying that “this is an outlet that makes me feel good, you know that allows me to give my opinion and not have to worry about being attacked or argued with or whatnot.”

Wilshire also said she appreciated the lack of censorship, relating it to freedom of speech.

How Popular Is The App Among UT Students?

Parler has shown to be popular mainly among conservatives and people in government, but has it reached the college community?

According to an informal poll, the answer leans toward no. 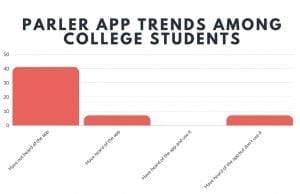 In an Instagram poll consisting of 50 UT students, almost 86% of participants said they had never heard of the app.

Out of the 50, only eight said they knew of the app, but none of the students actually used it.

“I’ve heard about the app through my parents,” said Jessica Fischer, a junior at UT. “I think they said it was kinda like Twitter but that’s about it. I mean I’ve never used the app and I really don’t have the urge to download it anytime soon.”

According to the self-conducted study, the most common reason for not wanting to download the app was that it was too similar to Twitter. Others mentioned that it seemed “boring” and that it “didn’t seem like it offered anything new.”

Students familiar with the app disliked how negative it appeared to be.

“I don’t use the app currently but I did have it downloaded for like a week,” said Riley Wildfeuer, a junior at UT. “I don’t even know how I kept it for that long, if I’m being honest, because it just seemed like a place of hate. There was just a lot of name-calling and lies being spread all the time.”

The app doesn’t appear to be popular among college students yet, but it could evolve to gain the attention of younger audiences in the future.

72% of U.S. citizens of voting age actively use some sort of social media, indicating that social media and its platforms, including Parler, could have played a very influential role in this year’s presidential election.

In the study, Dr. Jen Golbeck, a professor at the University of Maryland College of Information Studies and an expert in social networks, said “For people who are on social media, it is virtually impossible to avoid reminders and encouragement to vote. In as much as these platforms can impact decisions, they are pushing hard to get people to turnout.”

Though social media helped with voter turnout, it also helped spread misinformation about the election.

This is especially true in apps like Parler, which is committed to free speech.

Parler has criticized Facebook and Twitter for moderating their content in the past and during the election. Parler’s emphasis on “free speech” indicates that little to no efforts are being made at keeping misinformation out of the app.

Experts have warned that a lack of content moderation could prove harmful beyond creating political echo chambers and further spreading conspiracy theories.

Videos like these can be posted all over the app’s feed, with little to no consequences.

For more information on the newly popular app and how it works, visit here.