The pandemic has brought on unprecedented measures and instructional methods for classrooms everywhere. As educators try to adapt, most students are falling behind, especially those in special education programs. When it comes to local parents and teachers, two areas appear as the biggest concerns.

Pamela Jett, an educational assistant with Knox County schools, said the transition to a virtual format has been particularly hard for those involved in special education. “Some of the biggest challenges since we have returned is adapting the current SPED curriculum to virtual learning,” Jett said in an email. “Many of the programs and learning tools are best taught one to one, in person and it is difficult to translate that to virtual format, especially for students that struggle with communication.”

Jett has taught SPED curriculum for eight years. She noted the unique struggles of this school year by highlighting scheduling and social components. “With the increased focus on social distancing and limited contact among students and staff, it has been a challenge to arrange both schedules and classroom setup to accommodate the given guidelines,” Jett said.

A Glitch in the System

Out of all the hurdles she faces while teaching SPED curriculum during a pandemic, technology presents the biggest obstacle. For Jett, the challenge is “trying to find the right device to serve the needs of the student in the general ed setting, and help that student learn to navigate that device independently and successfully.”

Last May, the Board of Education approved a plan to allow Chromebooks to be made accessible to every student in Knox County. The devices began being dispersed at the beginning of the current school year. According to knoxschools.org , under a section titled “District-Wide Chromebook Initiative,” the plan is monetarily fueled by the CARES Act. The language in the plan states “Chromebooks will provide new learning opportunities and prepare students to succeed in a world where technology plays such an important role.”

While some students are seeing the success of this addition, others are grappling with the devices. “Some students are actually excelling due to the use of the technology, but I feel that most are struggling to navigate the given platforms used by the school system.” Jett said. “How do you keep a student with learning challenges engaged and motivated when you only have access through a screen?”

According to Knox County communications specialist Josh Flory, help is available no matter the learning environment. “Services for students have been addressed in collaboration with families on an individual basis,” Flory said in an email. “Accommodations and modifications are provided regardless of the educational setting.”

“How do you keep a student with learning challenges engaged and motivated when you only have access through a screen?”

A Look at the Numbers in Other Areas 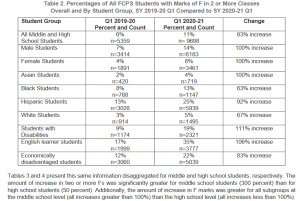 Socialization Is Key For Student Success

Effective peer interaction is also an important developmental tool that virtual students are missing. For parent Angie Holbert, it’s been the most impactful factor with her child. “I think the biggest challenge has been the social aspect of school,” Holbert said.

Holbert’s daughter, Morgan, has received Special Education services since preschool. Morgan, 16, is one of five siblings. Despite being surrounded by brothers and sisters in the household, Morgan still longs for the social connection obtained in a typical educational setting, according to her mother.

“Morgan is a super-social person,” Holbert said. “She is all about her friends and hanging out with her buddies.” Holbert cites family interactions and socialization outside the home as ways for her daughter to fill the void during virtual learning.

For Morgan, the biggest difficulty in growing interpersonal relationships this school year has been finding a connection to begin with. Holbert says that attending school virtually has revealed a worrisome social gap. “I find now that people still tend to talk to her like she is six or seven years old,” said Holbert. “That’s one of the biggest things I advocate for, is to be treated like her typical peers, because she does like to do the same things they do.” Holbert is referring to peer tutors that communicate with Morgan virtually throughout a typical school day.

It’s the “one to one” interaction that Jett and Holbert say is so important for many students, especially those in the SPED program. Out of the eight students in Jett’s class, two are virtual learners, for now. “That is subject to change in the upcoming semester,” said Jett.

When asked about the most recent administrative challenges and pressing issues raised by parents and educators during the pandemic, Flory offered no comment.

According to Flory, nearly 15 percent of the Knox County student population, grades Pre-K through 12, consists of Special Education students.

The Latest on Virtual Learning

On Sunday, WBIR reported that the district saw more than a 10 percent spike in confirmed COVID-positive cases prior to Thanksgiving break.

It comes after our local districts reported 625 new virus cases last week. So far, nearly 4,000 students and staff have tested positive since school began, per #WBIR

According to the report, many schools around East Tennessee are going strictly virtual, with no option of land-based learning. In Knox County, several programs are halting in-person classes until after winter break.