In celebration of Veteran’s Day, UT’s Vol Fighters hosted a Combat Fitness Challenge event to show participants what its like to take a walk in their shoes, or rather a run in their boots. The challenge presented was essentially the same test a Marine would do on a regular basis as part of their training.

UT student and veteran Gregg Crawford thinks it’s good for veterans at the university to see that the student body supports them.

“We want students and faculty to have a bit more appreciation for the military,” Crawford said. “Maybe by experiencing what it is like will help them understand how we train on a daily basis.”

The participants were separated into groups of two according to their height and weight to make the challenge easier. Each group began by running two laps around the TRECS field. They then lifted a 30 pound ammo box as many times as possible in the allotted time, with 91 being a perfect score for their age group. 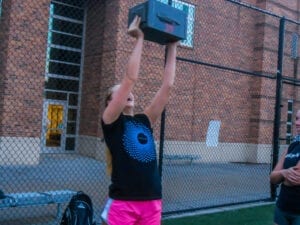 In the final portion of the test, each participant would maneuver through a course where running and lifting was heavily emphasized. The participants would sprint for 20 yards, crawl on their stomach for ten yards, crawl on their hands and knees for ten yards, maneuver through cones to drag and then carry their partner back to the starting line. They would then carry two 30 pound ammo boxes for 50 yards before finishing the course by throwing a fake grenade and carrying the ammo boxes back to the starting line.

UT sophomore Quentin Hatton admitted that he thought the challenge was going to be a lot easier and that it takes a lot of both physical and mental muscle to complete.

“It was tough and exhausting,” Hatton explained. “Lifting the ammo box was nothing compared to carrying my partner around.”

While the Volfighters had a good turnout, they hope that this experience shows participants what their training is like and gives them a greater appreciation for the military.