Football players Josh Dobbs, Jakob Johnson, Todd Kelley Jr. and others turned to social media over the past snow days to call UT students to war, a snowball war that is.

On Monday, Feb. 16, sophomore quarterback Josh Dobbs took advantage of the much anticipated snow day to rally students and football players alike. Dobbs tweeted out that there would be a snowball fight that night in Presidential Court, and many students responded that they were up for the challenge. 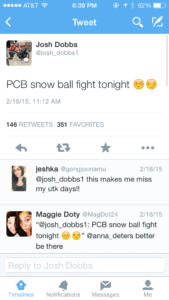 The tweet sparked a media frenzy as students were not sure whether or not the exchange would take place. Later than night, Dobbs confirmed via Twitter the time and location and challenged students to come if they dared. 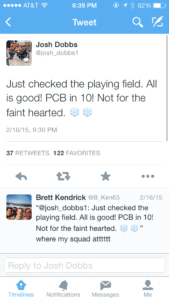 After a successful battle, football players took to twitter yet again to call for another snowball fight. On Tuesday, Feb. 24, a surprise snow day for UT students, players like freshman linebacker Jakob Johnson seized the opportunity to call for round two. Johnson sent out a series of tweets to call his fellow students and teammates to come once more for a brawl of the ages. 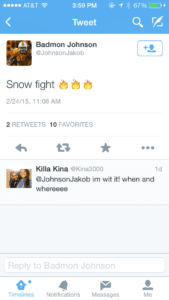 The second snowball fight proved a huge success as a large crowd of students came out to take on their favorite college athletes. Freshman safety Todd Kelly Jr. tweeted this picture of the students and players that were up for the challenge.

South Carrick resident Anna Louise Ayers said she heard about Tuesday’s snowball fight through Jakob Johnson’s tweets. She rushed down to Presidential Court to participate and snagged a picture with Dobbs.

Humes Hall resident Caroline Baker geared up in her snow attire and went out to prove herself. She also caught Dobbs for a picture and even convinced him to throw the Alpha Chi Omega sign. Baker said, “I just thought it was cool to see how the football students actually are students and can have fun just like us … We think of them as these big fancy guys, but in reality they are just every day students who just so happen to have amazing football talents.” 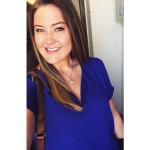