The return of students to campus post-Covid-19 has brought to light new challenges for the University of Tennessee in terms of its ability to house new and current students. Housing is a hot topic at UT with very few satisfying answers. In recent years, UT has experienced rapid growth in enrollments and as such growth in the number of new students that require housing.

The university requires almost all new students to live on campus in their first year “to ensure the quality of the first-year experience,” according to its website. With Tennessee recording its largest freshman class in 2022 it is causing more housing headaches for current students.

“I have nowhere to live next year,” junior Caroline Mueller said. “I already know there are so many freshmen that I don’t think there is even enough room for all of them to live on campus at the moment.”

According to the UT housing website, the university can accommodate 8,071 students across its 14 residence halls. After finding homes for 6,846 freshmen in 2022, that leaves about 1,225 spaces open for returning students – just a fraction of the 33,805 students who attend classes in person.

“I was planning on living off campus and I actually found out that I got denied pretty late,” freshman Ethan Ballard said. “Now I’m having to hope for on-campus housing.”

Part of the solution lies in off-campus housing, over which the university has no control.

About 78% of students, or 22,000, live off-campus, according to US News. However, at the recent off-campus housing fair hosted by the university, officials said nearly all complexes are already at full occupancy for the 2023-2024 academic year, including complexes with 636 and 840 beds and apartments with over 431 rooms. The tight housing market in Knoxville is feeding the problem. 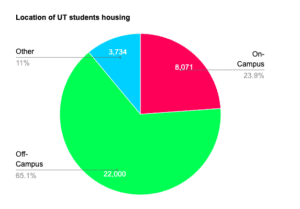 “Knoxville is to fault for a lot of it because I’ve seen the prices keep going up everywhere close to campus and I think because of that it’s becoming now a UT problem,” Ballard said.

In February this year, the university announced it would be building two new residence halls on campus, providing new accommodation for freshmen and upperclassmen for a combined total of $227.4 million.

The first of the two proposed residence halls will be built near Dogwood and Magnolia Halls and will have 525 beds. The second residence hall will be built between Caledonia and Terrace Avenues and have approximately 750 beds, providing space for an additional 2,550 students.

“I think it’s a little bit of both [to blame for the current housing crisis]; rent is definitely going up in all of Knoxville and it’s becoming a more popular place to live, but at the same time the university is letting in way more students and not accounting for housing,” Mueller said.

Short term, the university relies on off-campus residence complexes such as Quarry Trail, 303 Flats, The Heights and others to relieve the pressure on the UT housing system. Off-campus property developers are currently submitting new plans for new apartment complexes of up to 1,000 beds to help with the housing crisis.

“Demand is through the roof, not just for student properties, but for conventional properties,” Knoxville Apartment Guide, Brandon O’Connor said to Knox News. “And, you know, the two definitely affect each other.”