A new bill that would essentially criminalize homelessness in Tennessee has passed through the state legislature has become law without a signature from Gov. Bill Lee. Social justice advocates and faith leaders from across the state have come out against this bill saying that it is cruel to Tennessee’s homeless population.

“We are really worried about the consequences this will have on the unhoused community,” said India Pungarcher, advocacy and outreach specialist for Open Table Nashville. “There are not a lot of shelter options because they either do not exist in the quantity needed or are not available for specific populations.”

The bill makes it a Class C misdemeanor for a person to camp under a bridge, overpass, or shoulder of a state or interstate highway and prohibits soliciting near the road. After a warning, violators would face a $50 fine and be ordered to do community service.

The bill also updated the Equal Access to Public Property Act of 2012, making it a class E felony to camp on local public property in Tennessee. If convicted, people could face up to six years in prison and a $3,000 fine for sleeping on public property.

“Even if people are not charged and prosecuted, we know that this is something that police officers and state troopers will use to force people to force people off a piece of property,” Pungarcher said. “Having a felony on your record also makes it extremely difficult to gain employment and almost impossible to get into housing. We have been working with someone who has struggled to get housing because of a misdemeanor from 14 years ago; a felony would make it even harder.”

After it passed, there was a huge push from citizens and faith leaders across the state to stop Gov. Lee from signing the bill in the hope he would use his veto power. People have signed petitions and even protested outside of Lee’s office to stop this bill from becoming law.

“We had 50 advocacy groups and service providers along with over 300 faith leaders, reverends, ministers, pastors from a variety of different faith backgrounds sign onto this letter begging Gov. Lee to use his veto power,” Pungarcher said. “We appreciate that the governor did not sign the bill because it sends a different message; it shows he does not necessarily support this legislation, but he still did not use his veto power so this bill is going to become law.”

Critics have also said that this bill will actually make life even more difficult for the homeless and have the opposite effect of what lawmakers intended. Instead of encouraging the homeless to find work and housing, this bill makes it harder for them to get back on their feet.

“We know that investing in affordable housing can end homelessness, we just need to invest in it more,” Pungarcher said. “It seems that every time we take a step forward in Nashville and other cities across the state it is preempted by the state.”

Homelessness has become a real problem in Tennessee. According to the United State Interagency Council on homelessness, in 2019 there were an estimated 7,256 homeless people in the state. Knoxville has about 800 people who are homeless, and about 24% of those are unsheltered, according to city data. Before the pandemic, the homeless population in Tennessee had fallen every year since 2015, partly  due to the efforts  to  counter systemic problems of affordable housing, but  those  efforts  are  often  thwarted  by  the  legislature. 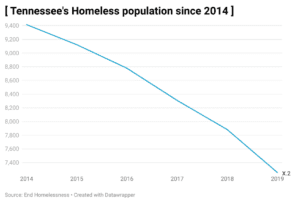 “One example is in 2016 when we worked in Nashville to pass inclusionary zoning, an ordinance that would have incentivized developers who build larger-scale apartment complexes to set apart some of their units as affordable housing,” Pungarcher said. “The state legislature went to work right away and preempted that in 2018 making it much harder to create affordable housing. The possible effects were never shown because of how quickly the state passed new legislation.”

Even though no state-wide data exists yet, the pandemic has definitely increased the homeless population. The financial problems associated with the pandemic included job losses and furloughs. According to a report from Congress, in April 2020, the unemployment rate reached 14.8% — the highest rate observed since data collection began in 1948.

The pandemic’s effects on homelessness are another reason why this new law could have large-scale consequences. Instead of investing in affordable housing and shelters in order to combat the problem, it seems that the state of Tennessee is working to make the homeless unseen and unheard.