The Student Aquatic Center at the University of Tennessee-Knoxville will be closed this summer as the school fixes a decades-old sinkhole below the pool.

The SAC was built in 1967 for students to enjoy the hot days of the year after class or work. There used to be games and fun events held throughout the semester by the university such as the “Dollar Dive”.

According to the UT Daily Beacon in 1967, “Students will be able to dive for silver dollars in the new Student Aquatic Center outdoor pool after its informal opening Monday at 3 pm.” 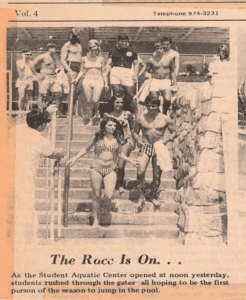 In the mid-’80s a sinkhole opened in the middle of the pool and the bottom dropped out. In 2003, when the Director of RecSports at UTK, Katy Locke, first got hired it was discovered that the pool was not grounded and projects started immediately to assess the situation.

“In 2019 the Knox County Health Department required that we repair the pool deck or it will be closed until the repair could happen,” Locke said. “The cost of the repair was very high and we already planned on renovating the space so we moved forward with the project. The project should take 4-5 months to complete.”

Locke said the original plan was to renovate the SAC in the winter of 2020-2021 but the COVID-19 pandemic and increasing construction costs put the entire project on hold. The project is costing the university just under $5 million, which will come from reserves.

“We tried very hard to have a winter project to reduce the impact on our users, but increasing construction costs pushed us to move forward,” Locke said.

The project comes at the worst possible time of the year, as students look forward to enjoying some time at SAC after class or a day off from their summer job. Now, they have to find another pool.

UTK student Will Greene is frustrated about his summer prospects.

“It ruins the whole thing. I was really looking forward to spending the summer swimming with my friends but now without a pool, I don’t know what I’m gonna do for fun,” he said.

Sinkholes are common in East Tennessee due to the minerals that make up the region’s ground.

In an interview with WVLT, University of Tennessee Hydrogeology Professor Larry McKay said, “Sinkholes are a common feature in East Tennessee. It’s a fundamental part of geology. Dissolving of the rock, by moving water. And this can happen in certain rock types, particularly carbonate rocks like limestone and dolomite.”

There are plenty of sinkholes around the area that have been here for decades, like the one under the SAC pool.
In the same interview, Jefferson County Historian Bob Jarnagin said, “We’ve had sinkholes in this area for decades, for a long, long time.”

These sinkholes form underground water systems or areas where the ground can shift from a series of water flows or movements.

The sinkhole below the pool could have been caused by the water from the pool leaking into the ground below the shell of the pool.

Some students, like Grayson Beatty, hope to see improvements to the SAC that may benefit student life during this time of year.

“I’m excited to see what gets added or changed. My biggest hope is for a basketball goal and water spouts to be added. I think that would benefit student life when it comes to pool days in the summer,” Beatty said.

The renovations will result in a few structural changes.

“The new SAC will be 12 feet deep instead of 18 feet and we are taking out the diving well on the side. The pool will keep its “L” shape so it is basically the same, just not as deep and no more diving boards.”

The renovations are expected to be done near the end of the Fall 2022 semester, depending on the supply chain and weather conditions. Just in time for the students to enjoy the SAC during the Spring 2023 semester.