The Lady Vols’ recent struggles can be attributed to many reasons, but there may be none bigger than their third quarter performances.

In their last two losses against Florida and Connecticut, Tennessee was outscored by a total of 23 points in the third quarter. This is a stark contrast to the phenomenal post-half performances they put up at the beginning of the season.

Against the Tigers, the Lady Vols led by just five points going into the halftime break. Instead of letting the game slip away after half like in their two previous outings, they took the game by force. They outscored Missouri 26-6 in the period, creating a 25-point lead heading into the final frame. 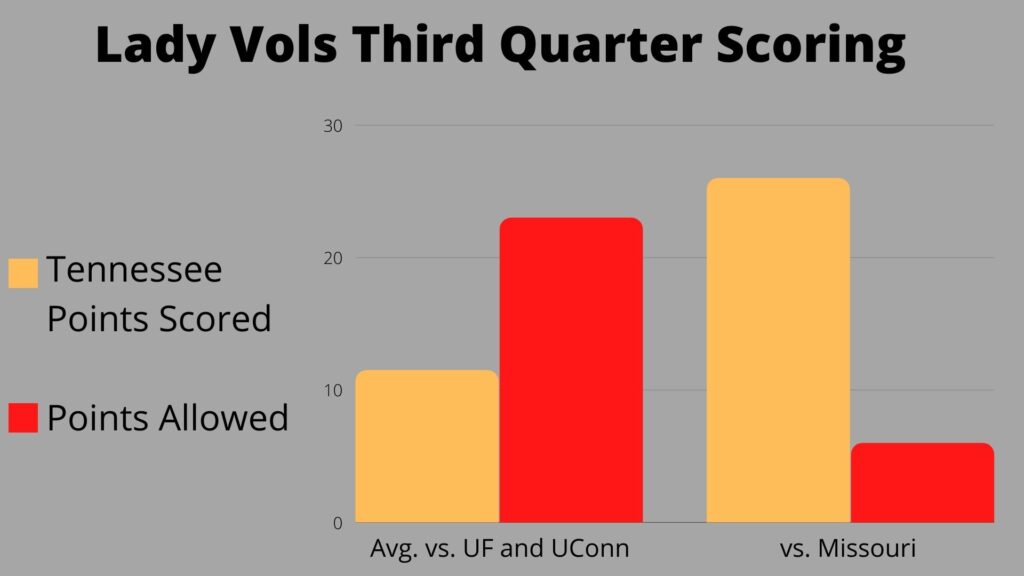 The six conceded points are the second-fewest points given up by Tennessee in the third quarter this season behind the five allowed against Tennessee Tech. This was the result of holding Missouri to an abysmal 16.7% shooting from the field and no made 3-pointers.

“We just knew we had to defend in the third quarter,” said Tennessee wing Tess Darby. “The game wasn’t over, we still had 20 minutes left to play. That was our mindset, go out and compete and do what we do and just defend. It was as simple as that.”

This mixture of stifling defense and an explosive offense resulted in the lopsided third quarter.

At the head of the offensive outburst during the stretch was Alexus Dye. After sitting for the majority of the first half, Dye was held scoreless going into halftime. However, she came out on fire after the break. She scored nine of Tennessee’s first 14 points of the third quarter and became the go-to player on offense.

“In the second (half), (Dye) gave us a big boost,” said Tennessee coach Kellie Harper. “Obviously, she was able to be a go-to there. She ran the floor and we got her an easy one. I’m proud of her effort. She got in there and got after some boards as well. I’m really excited to see her get going.”

Dye’s 11 points on the night was a welcome sight for Tennessee after she scored just one point against Connecticut. Her scoring output went along with five rebounds in her 16 minutes on the court. Horston discussed how they are at their best when Dye is firing on all cylinders.

It was not just Dye that flourished, though. The team as a whole played well, ending the quarter on shooting splits of 56.3% from the field and 66.7% from behind the arch. This along with just one turnover contributed to the substantial period.

Tennessee will need to continue to play well past the half if they hope to complete the season sweep over Vanderbilt on Sunday. Tip-off is at noon and the game will air on SECN.