After falling to Texas 52-51 on a poor shooting performance, Tennessee needed to bounce back offensively in its next appearance.

Tennessee’s offensive turnaround is being credited to the final minutes of the loss to the Longhorns. After scoring just 30 points in the first 30 minutes, Tennessee scored 21 in the final 10 against Texas.

“I feel like we found our groove the last six to seven minutes of that Texas game,” said Josiah-Jordan James. “We just tried to learn from what we did in that short period of time at Texas. Just tried to put it on display today.”

This newfound confidence translated into two 40+ point halves. Tennessee also collected 22 assists. This aided the Vols in reaching an astonishing 75.9% of made baskets.

Leading the game in assists was freshman Kennedy Chandler. Chandler finished the game with seven assists to go along with his team-high 16 points.

Following Chandler were fellow guards Santiago Vescovi and Zakai Zeigler with five and three assists respectively. The trio of guards’ ball movement made it tough for Texas A&M defenders to keep up.

“That’s when we’re at our best, when the ball doesn’t stick,” said Tennessee coach Rick Barnes. “We’re really moving the ball, getting it from side to side, getting movement. It’s hard to guard.” 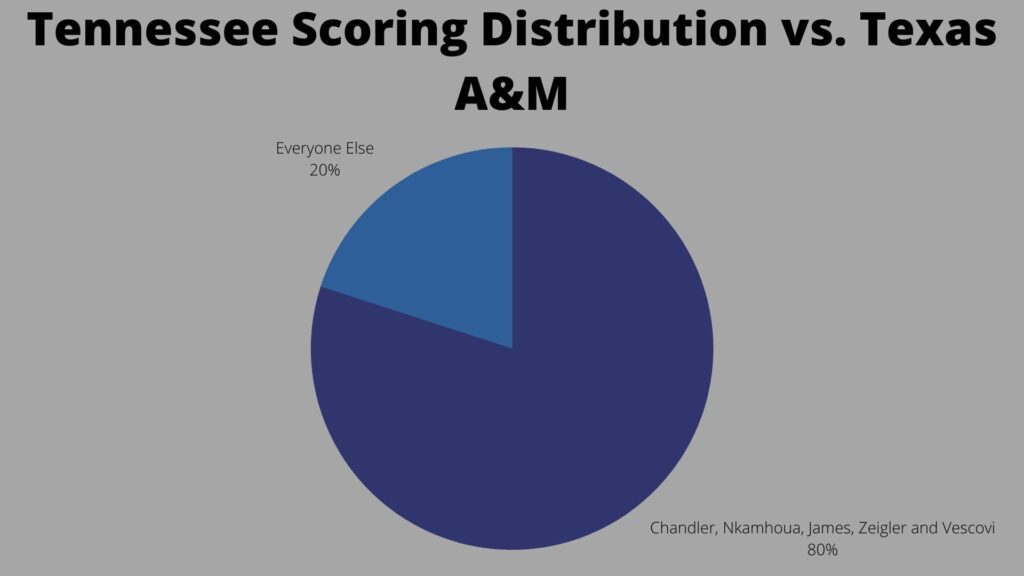 These players were key pieces of big runs by the Vols that stretched the lead. After Texas A&M tied the game early in the first half, an 11-0 run gave Tennessee an early 11 point advantage that the Vols never surrendered.

In the second half, the Aggies were able to pull within a single point, but Tennessee went on a 16-2 run to take a strong grip on the game. These runs kept Texas A&M at bay during times when the Aggie offense heated up.

Tennessee will need this offense to travel as well as their defense as they look at a two-game road trip in the coming week. First, they will take on South Carolina on Saturday with the hope of extending their SEC win streak to five straight victories. The game will tip-off at 1 p.m. and air on CBS.