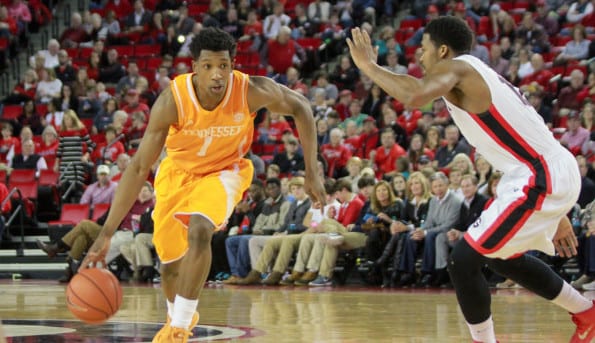 Tennessee’s men’s basketball team (13-9, 5-5) traveled to Athens, Georgia, Saturday to take on the Georgia Bulldogs (15-7, 6-4). The Vols left with their fourth SEC loss in the past five games.

Standout Vol Josh Richardson could not get much to fall, coming off a career best scoring output against Mississippi State on Feb. 3.

Richardson was 0-11 from the floor until he hit a late field goal within the final minute, finishing 1-13. Richardson added five rebounds, four assists and four steals, capping a solid performance outside of shooting the ball.

The Vols added 10 points off the bench from Derek Reese, Willie Carmichael III and Detrick Mostella.

As a whole, Tennessee shot 36 percent from the floor compared to Georgia’s 55 percent. From three point range, the Vols hit only 28 percent, while Georgia hit 44 percent.

Turnover differential was a key aspect of the game. The Vols only turned the ball over eight times while forcing 20 turnovers on Georgia’s end. Of those 20 turnovers, 14 of them were steals by Tennessee. Georgia only stole the ball twice.

The Vols out-rebounded the Bulldogs 12-8 on offense, but Georgia had the overall advantage, 34-27.

Georgia had three separate players lead the team in scoring. J.J. Frazier, Charles Mann and Nemanja Djurisic each had 10 apiece. The Bulldogs added 11 points off the bench.

Although the Vols came up short yet again, Donnie Tyndall’s squad has continued to prove they won’t go down without a fight.

Tennessee’s last four losses have each been by six points or less. While talk of losses is never a good thing, Vol Nation can take comfort in knowing its team has fought until the last second rather than being blown out. Tyndall started the season with very little to work with and thus far has exceeded expectations.

After the game, Tyndall emphasized his team’s effort.

“That’s what our team does, you guys have seen it, we’ve played 22 games now, and I can’t say that there has been any game where we haven’t given at least very good effort. You know, tonight I thought we gave great effort, we just came up a little bit short,” he said.

Tuesday night the Vols will look to end a two game losing streak when they travel to Nashville to take on Vanderbilt at 9 p.m.