On Tuesday, Nov. 4  in the Humanities and Social Sciences Amphitheater, the All Campus Theatre presented “True West”, a play written by Sam Shepard about brotherhood and the lure of the Wild West.

All Campus Theatre is UT’s undergraduate theatre association and produces four plays a year. However, this play was the thesis project of a senior theatrical performance major, Cody Beyer.

Beyer’s thesis was complex and required the careful attention of the audience to succeed.

“My thesis was to take this show and see how far I could twist the elements of theatre and still have the audience understand the story,” said Beyer. “Which was quite a challenge.”

In the show, there were two brother characters Austin and Lee. Austin plays the youngest brother and Lee plays the older brother. These characters were played by Beyer and and Erik Schllier, a UT grad and current intern. To twist the elements of theatre, Beyer and Schllier would switch the roles of Austin and Lee throughout the play around three times, which involved changes in costume, relationship, demeanor and behavior.

This was a difficult task, but both actors agreed it helped them to understand the characters more and more.

“We basically had to each memorize an entire play,” said Schllier. “Although I was initially more comfortable playing one character[Austin], in switching roles I found parts of myself that could relate to Lee, which was a pleasant surprise.”

Beyer expressed the same sentiment but about Lee, which was a far cry from reality, where Beyer is the youngest of three brothers and Schllier is the oldest of his.

Though Tuesday night was the last showing of True West, All Campus Theatre produces four shows a year, so if you missed it, you can check out more opportunities and information here. 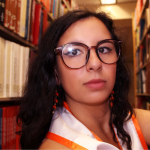