Residents of UT’s Laurel Hall have lived in a construction zone all semester long – traversing tunnels made for overhead protection to leave for class or go to the nearby POD market. As entrenched as the project is in the students’ lives, the reason for the endeavor is entirely unknown to them.

Since May 23, Laurel Hall has been under maintenance due to deterioration in flashing and steel lintels, the L-shaped structural pieces above the air conditioning units. Old lintels are often associated with rust, cracks, leaks and mold.

Steven Briggs is a foreman for Wasco Inc., the contractor currently working on Laurel Hall.

“A lot of it is just replacing the steel lintels,” Briggs said. “And replacing the flashing is a big thing. The material they used back in the 60s was subpar to what we use now. The original flash that was in there was pretty much deteriorated and letting a lot of water in.”

Specifically, Laurel Hall’s lintels are internal pieces that support the weight of bricks just above the air conditioning units. These bricks can sink down, cracking the mortar joints and potentially exposing the building to water. Flashing refers to thin sheets of waterproof material placed over areas that are susceptible to leaks.

“The windowsills themselves have been leaking water and getting into the rooms. So we are putting new lintels in, we take the old brick out, we put new lintels in, we put rubber flashing on and then we relay the brick and caulk all the joints,” Briggs said.

The original, .125-inch lintels from the building’s construction in 1967 are starkly different looking from the modern, .25-inch ones being installed now. Though the time frame on when lintels need replacement is variable, and can be relatively long, it is widely recommended to replace lintels when corrosion or cracking in mortar joints is found. 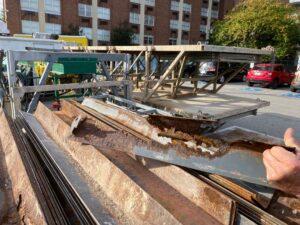 With the replacement of worn lintels, risks of leakage or mold issues go drastically down for Laurel Hall. In October of 2018, all students were moved out of Laurel Hall, when EAQP found that 56.5 percent of surface samples collected across 46 rooms tested positive for mold. It is unknown if the deterioration in lintels is related to this finding, however.

Laurel Hall has a total capacity of over 600 students, and has been full since the beginning of the fall semester. Despite the bustle, work on the building has continued.

“Working around the building being an open building [takes longer]. We made a lot better time when the students weren’t here,” Briggs said. “But now you know, working around all the students the traffic gets slowed down a little bit.”

Listen to more of the interview with Steve Briggs.

It’s unavoidable that on-campus construction will be intertwined with student life, due to Tennessee’s rapid growth. Shutting down Laurel Hall for such a minor renovation is likely not an option for UT, as in 2022, a lack of adequate student housing has affected hundreds of students. The lack of on-campus housing has resulted in numerous freshmen staying in Laurel, a traditionally upper-division complex. 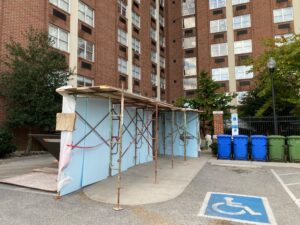 “I would say it’s a campus that definitely feels a little overcrowded at times. And, I mean, we’re breaking records left and right,” said UT freshman Ryan Matheson.

In 2022, Tennessee had record-breaking enrollment, which was attributed to an all time high in student retention. UT’s upward trend will almost certainly necessitate more housing-focused investments like this one. Regardless, Laurel Hall’s lintel upkeep is a win for students living in the building. The project is set to end in late November.

No. 22 Vols soar past FGCU in bounce-back win