When Rae Burrell went down with an injury in the Lady Vols’ season opener against Southern Illinois, silence fell over the almost six thousand fans inside of Thompson-Boling Arena. Tennessee lost a key scorer for an unknown amount of time in the Lady Vols first appearance this season.

This glaring hole proved to be an issue, as Tennessee ranks 260th in the country in points per game through its first four games. However, with No. 16 Tennessee’s (4-0) 52-49 win over No. 23 USF and 74-70 overtime win over No. 12 Texas, the Lady Vols stayed perfect on the season even while playing four quality opponents.

The player to keep this offense afloat has been Jordan Horston. Horston is known for her defense, but the former 5-star recruit, who was ranked the second-best player in the country out of high school by ESPN, has been putting on an offensive clinic. She did not play in the opener, but in her three appearances, she has led the team in scoring. 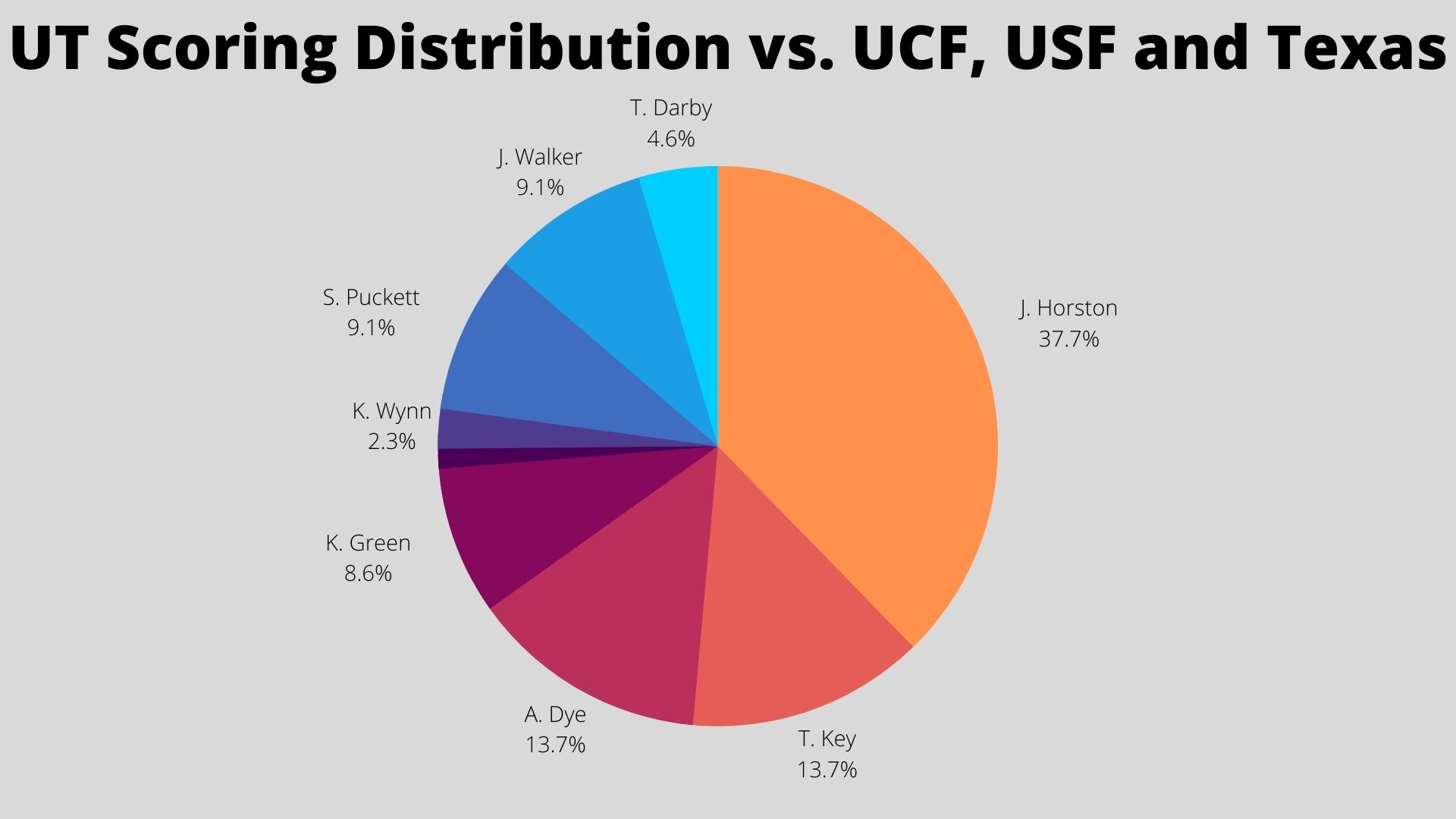 Horston is currently averaging 22 points per game, which bests her averages of 10.1 and 8.6 in her first two seasons. Her performance against Texas also marked her career-high in points with 28 and rebounds with 15. She is shooting 44% from the field through three games, as well.

Not only is she scoring at will, but she is scoring when it matters. In the fourth quarter and overtime, she has taken over ball games and propelled Tennessee to victories. Against USF, she scored 12 points on 4-for-6 shooting. Against Texas, she scored 15 points on 6-for-10 shooting down the stretch. 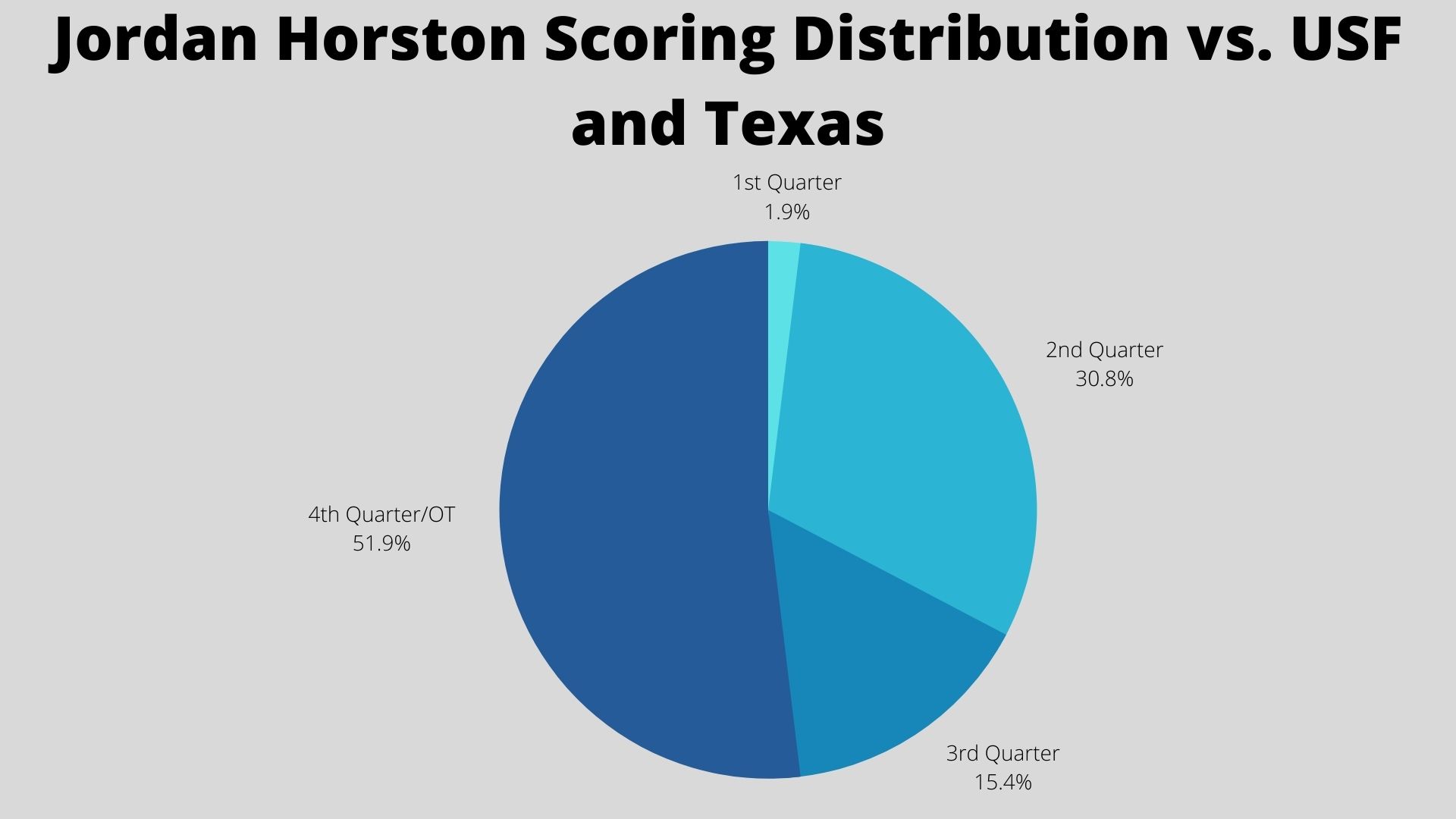 However, Horston does not want all the acknowledgment for the team’s success. She recognizes her teammates for these impressive victories instead of shouldering the credit herself.

“Honestly, I want to put it on my teammates because they were the ones keeping me motivated and keeping me confident,” said Horston after the win over USF. “Without them, we wouldn’t have won. It’s not a one-man job.”

Even with Horston’s scoring, the lack of a consistent offense has caused the Lady Vols to rely on their defense to win games. Coach Kellie Harper’s squads are known for their defensive prowess and this year is no different. There are elite defenders all over the court for Tennessee. The backcourt of Horston and Brooklynn Miles locks down opposing guards and Tamari Key swats and deflects anything shot near the rim. This shot-blocking ability from Key has been a difference-maker for the Lady Vols this season.

The 6-foot-6 center erupted in the game against the Longhorns, becoming the first-ever Lady Vol to record two triple-doubles in her career. She ended with 10 points, 18 rebounds and 10 blocks. She also recorded six blocks against USF.

Key thrives when she is able to hover around the restricted zone and defend any incoming close shot attempts. Tennessee’s pesky perimeter defense and favorable matchups have allowed her to provide this help and be a defensive menace. This has caused major issues for opposing teams.

“(Key) is six-six, probably six-seven. She can move. She’s fast. I mean, that’s a cheat code right there,” said Horston after the win over Texas. “So, I feel like having her on our team, just being there if we get beat, like I said she’s an eraser.”

Similar to Horston, Key also has come alive late in games. Against the Longhorns, she secured seven boards and swatted away an astonishing six shots in the fourth quarter. Both players were integral parts of the comebacks that transpired late in the games against USF and Texas. 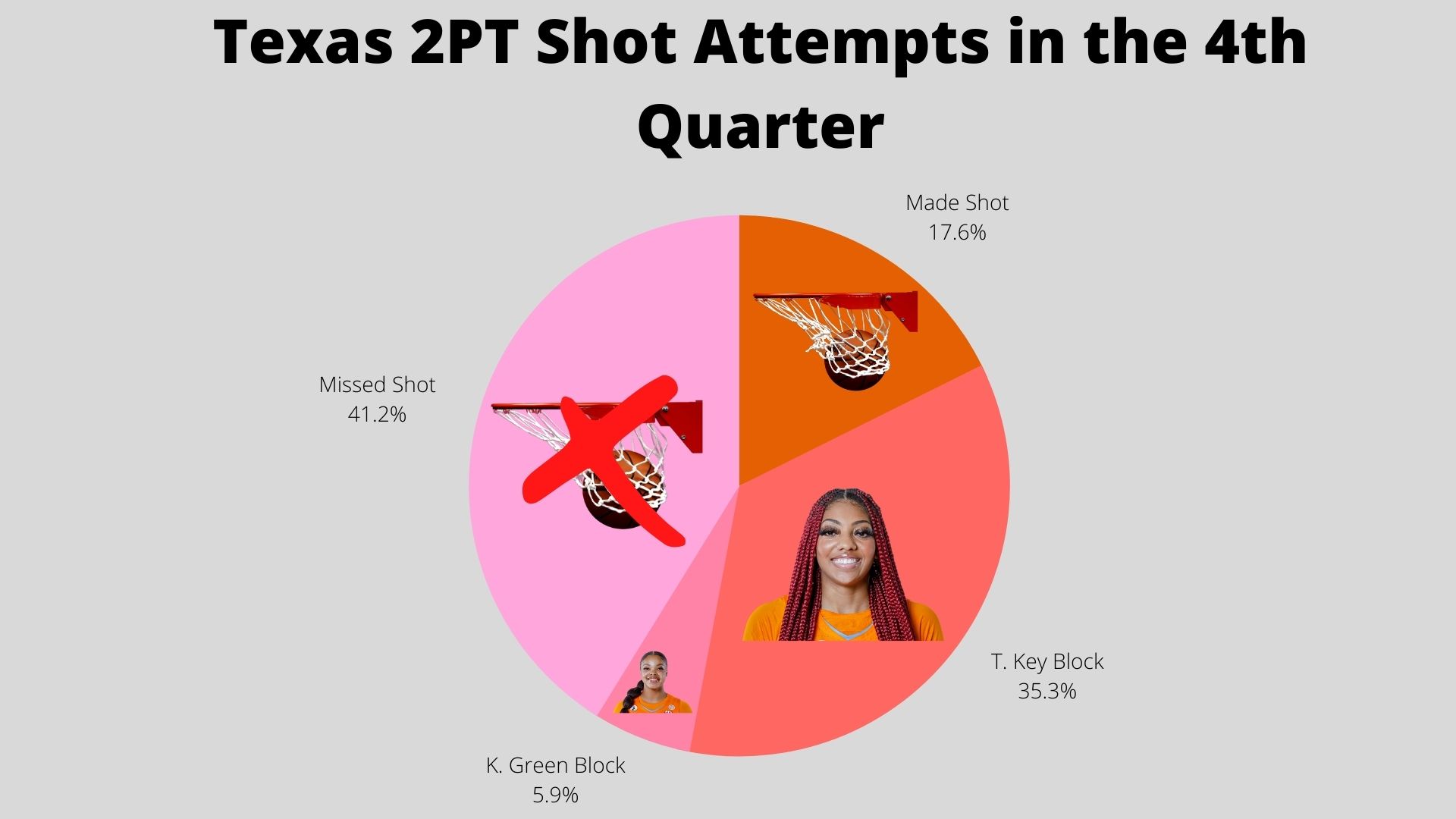 However, Key has struggled to stay on the court in the past. Whether it was getting gassed as a post player or falling into foul trouble, she often was not able to play large amounts of minutes. This has not been the case this year, though, as she logged 37 minutes against USF and 39 against Texas.

“I want to stay on the floor as long as I can. If I needed to get a blow, I know (Keyen Green) can come in and give me a blow and still produce for us,” said Key after the win over Texas. “I’m glad that I’m in shape and able to stay in the game that long.”

This combination of Horston’s offense and Key’s defense has been deadly so far, but more tests are on the way for Tennessee. Their next games are on Nov. 26 and 27 against Power 5 opponents of Kansas and Oklahoma State as a part of the South Point Thanksgiving Shootout. The Lady Vols also travel to Blacksburg to take on No. 25 Virginia Tech on Dec. 5.