As the International Space Station (ISS) flew 250 miles above Knoxville, Tennessee on Wednesday, March 1, the public gathered in the University of Tennessee’s Nielsen Physics Building in hopes of speaking to an astronaut aboard the station.

If the event had gone as planned, students would have had a 12-minute interview with Commander Shane Kimbrough at approximately 2:08 p.m.

According to Grayson Hawkins, the former President of UT’s Student Space Technology Association, students from Knox County schools and UT were chosen to ask the astronaut questions. The group contacted Andrea Berry, the Supervisor for the Knox County School District, to send the contest rules to teachers across the county.

“She sent out our contest rules to astronomy and science teachers. They gathered questions and sent us the top five from each of their classes. We sorted through the top five,” Hawkins said. “A group of UT students just chose the winners and they happened to show up today which is exciting.”

After attempting to contact the ISS multiple times for 10 minutes, attendees only caught a glimpse of contact with ISS before the signal was lost. While many attendees were disappointed, those who opted to stay listened to a brief lecture about the ISS from UT Astronomy Coordinator Dr. Sean Lindsay. 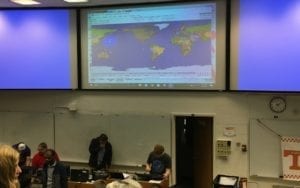 Lindsay emphasized how the ISS is only 250 miles directly above ground and how, while it may seem far away, it is approximately the same distance from Knoxville, Tennessee to Atlanta, Georgia.

“There are people that live their everyday lives up there. There are astronauts doing the same sort of things that we are doing, except in a much more extraordinary way,” Lindsay said.

Lindsay discussed the origins of the ISS and its actual launch on Nov. 20, 1998.

“The construction still continues,” Lindsay said. “There was recently a new module added and they still have plans to add more and more modules.”

Lindsay emphasized that the ISS is not just any ordinary space station, but has the term “International” in the name for a reason.

“This is one of the triumphs that we’ve had in human diplomacy,” Lindsay said. “Perhaps one of the best diplomatic things we’ve ever done. We have astronauts, six of them, that work together on a daily basis and they have no care in nationality. They work as a cohesive unit. So, this operates as a diplomatic station as well.”

Lindsay discussed how the ISS is visible to the naked-eye at night and frequently passes overhead. He also mentioned how it is often brighter than Venus and the size is slightly larger than Neyland Stadium. Lindsay provided links to websites for attendees interested in learning how to locate the station at night which include: Spot the Station, ISS Astro Viewer and Heavens Above.

Toward the end of the lecture, Lindsay spoke briefly about the activities happening on the ISS.

“All of these activities in some which way, shape or form are enriching humanity,” Lindsay said. “Even when they’re at play. If you don’t believe me at that point, I encourage you to look up Chris Hadfield’s tribute to David Bowie where he played the guitar on the International Space Station and made a music video as a tribute to David Bowie.

Lindsay continued by talking about microgravity and its effects on humans, including the stretching of one’s spine, loss of vision and the body’s response to medicine. Lindsay used UT alumni and astronaut, Scott Kelly, as an example, because Kelly was two inches taller when he returned to Earth after living in space for one year.

“What about growing plants? How do plants respond to microgravity? If we’re going to do long-term missions, like a six month voyage to Mars, we probably want to be able to provide our own food,” Lindsay said.

Lindsay emphasized that with microgravity, bone density is also a concern.

Lindsay said the “Twins Experiment” is the best starting point to see how DNA is changed by microgravity.

He also mentioned one of the primary purposes of the ISS is education and outreach because of contests like the Student Spaceflight Experiments. It is a nationwide contest where student designed experiments are sent to the ISS.

“Simply, one of the best services it does is generating awe and wonder about the universe and science. That’s one of those things…being able to inspire entire generations,” Lindsay said. “The International Space Station is amazing…and I was hoping to talk about how several people were inspired by getting to talk to an astronaut today.”

Lindsay included his lecture with photos taken from the ISS.

For anyone interested in learning more about the ISS, there will be an event on Thursday, March 2 at 5 p.m. in Dabney-Buehler room 301 with guest speakers, Dr. Mark Whorton, the Executive Director for UT’s Space Institute and Barbara Lewis from Mission Control at NASA’s Johnson Space Center.