The group assembled to discuss potential gun legislation in Tennessee. Members voiced concerns about bills that would extend carry laws into previously gun free zones and legislation that would upend the concealed carry permit process.

HB493 and SB131 would allow firearm owners to carry either concealed or visible weapons without a carry permit. The bill’s current form would also remove provisions maintaining public schools and related areas as prohibited zones for firearm carry.

Similarly, HB884 and SB1341 would allow an individual holding a valid permit to carry at any location in Tennessee. The Tennessee General Assembly website provides a bill summary that identifies the only limitations being for those who are; drinking alcohol, in a judicial proceeding or are on school grounds without notifying the principal.

HB0363 and SB653 would remove the prohibition on carrying in posted locations or places operated by state or local governmental entities unless metal detectors and posted guards surround every public entrance. 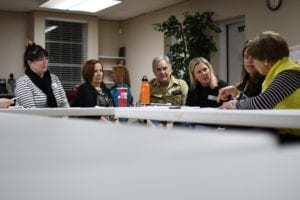 These bills would allow for anyone who legally owns a firearm to carry on college campuses.

Such proposed legislation prompted strong reactions from groups against gun violence including Moms Demand Action. Kendra Straub, the local group leader for Moms, explained the organization’s goals and how they operate.

“Our point is not to embattle people in the news; our point is to save lives,” Straub said.

Straub explained though there are 23 bills of concern, this number has fallen from previous years. She emphasized her belief in the existence paths to reduced gun violence in Tennessee.

The group provided instructions on identifying members’ district legislators in an effort to enlighten those in attendance on who would most effectively hear their voices. The group also emphasized the audience’s power to affect change in their constituency.

One member, Ashley Maynor, an assistant professor and digital humanities librarian at the University of Tennessee, spoke about her efforts to inform people about the costs of campus carry in regard to both safety and finance.

“I’ve been compiling research about campus carry,” Maynor said. “All data is taken from the U.S. government, the Clery Act and academic studies. Its not from a partisan group or lobbyist group.”

Maynor hopes the work she is doing will enlighten those unaware of campus carry ramifications.

Straub and the organization share this goal to inform.

“We want a student leader,” Straub said. “The best ideas haven’t even been born yet.”