Less than a week after performing her song “Once” on stage with Alicia Keys and winning her first Grammy Award for Best Country Solo Performance, Maren Morris brought her Hero tour to a sold-out crowd at the Bijou Theatre in Knoxville, Tenn. with opening act Devin Dawson on Friday, Feb. 17.

Opening with a song from his new album that will debut later this year, Dawson stole the hearts of hundreds of fans with his soulful voice, honest lyrics and lively stage presence. While this was Dawson’s first night on the Hero tour, his instant connection with the audience was what drew in many audience members.

Dawson made the importance of his fans impeccably clear, especially when he announced he would be upstairs by the merchandise table after the show to “hang out” with everyone. 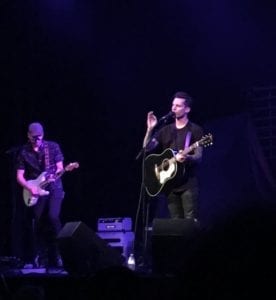 After a short intermission, Morris charmed her audience with her relaxed, yet energized stage presence and mesmerizing voice. Performing her hit single “My Church” and other crowd favorites such as “80’s Mercedes,” “Sugar,” “Drunk Girls Don’t Cry” and “Rich,” Morris pleasantly surprised her audience by proving her true musical talent.

Morris also played several of her lesser-known songs, yet the audience showed their true dedication of the artist and sang along. This included a song called “Bummin’ Cigarettes” that only made it to her deluxe album.

Morris was clearly humbled by the sold-out crowd and acknowledged how truly grateful she is for everything her fans have done for her thus far in her career. 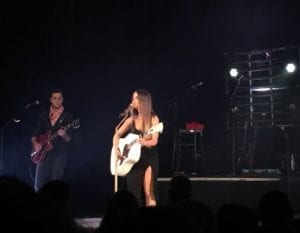 Toward the end of the show, Morris brought Dawson back on stage for a duet of her song “Company You Keep.”

Between interactions with the crowd and her incredible vocals, Morris’ stellar performance made the crowd beg for more when she walked off stage after performing her hit single “My Church.”

Morris closed with her song “Second Wind,” which turned into a mashup of Beyoncé’s “Halo,” leaving the crowd in awe of her vocal capabilities.

Following the show, Dawson stayed true to his word and met with fans by the merchandise booth. Dawson showed his genuine appreciation for his fans and took time to meet with each fan standing in line. He thanked them for coming to the show and asked them to sign up for his email list, emphasizing that he will be releasing a new song each week.

For more information on Morris and her tour dates, visit her website.