Every year, Knoxville joins communities across America in conducting a Point-in-Time (PIT) count to assess homelessness in the community. This January, Knox County joined a growing number of American cities in trying something new.

PIT counts annually record how many people experience homelessness in a community on a single night. The numbers are reported to the Department of Housing and Urban Development, where they go into a national database. On a local level, PIT counts help municipalities address the specific needs of their homeless populations. They also measure effectiveness of programs already in place.

Michael Dunthorn, program coordinator for the City of Knoxville’s Office on Homelessness, said the desire to do a youth count came from both national and local directions.

“There’s a national effort to try and get a better idea of the youth component of homelessness, but then, locally, there’s a youth homelessness council that has formed as part of the local homeless coalition that has really geared up over the past year, and they also really wanted to do this,” Dunthorn said.

Gabe Cline, chair of the Homeless Coalition, said the youth council formed so the city could address specific needs of the youth population.

Both Dunthorn and Cline noted youth experiencing homelessness are often trying to finish their education and lack support systems or experience to help them navigate life.

“They don’t necessarily have the independent living skills that some older adults have had,” Cline said. “They don’t have typically a job history or a rental history, so when they go to try to start out on their own, they don’t have anything to fall back on.”

For the Homeless Coalition, creating support for homeless youth was motivation behind doing this PIT count.

“We all need that kind of support. Most of us were fortunate enough to get it from our families or elsewhere in our communities, but I think for homeless youth, they don’t have those natural support networks. Our coalition is hoping to be able kind of fill some of those gaps,” Cline said.

To advertise the count, the Homeless Coalition posted flyers in public libraries and bus transfer stations. The coalition also contacted staff at Knox County Schools and Pellissippi State Community College. For Cline, it was a learning experience. 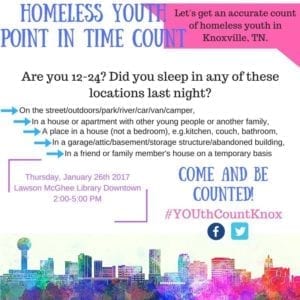 Youth are often not living in shelters or living on the street. Youth are typically “couch-surfing,” or moving from place to place, so connection can be hard. The young people may not self-identify as homeless.

“I think a lot of times the youth themselves don’t really identify as ‘yes, I’m homeless because my parents kicked me out and I’m moving from friend to friend,'” Cline said.

On the day of the count, volunteers hit the streets seeking youth to survey. In addition to pure numbers, volunteers tried to collect demographic information and specific experiences of individuals.

Dunthorn helped to send out groups of volunteers, and Cline remained at the Volunteer Ministry Center troubleshooting issues that came up.

“Really for this year, it was almost a learning experience to figure out where we might find folks. Some places we anticipated there was nobody, and then other places we found quite a few,” Dunthorn said.

Cline hopes to do even better in future years.

“What we got back from the school system was that they had information about more youth than we counted. So I think we still have a lot of work to do to figure out how best to engage folks and let them know that there are folks out here who want to try to help them navigate this system,” Cline said.

While Dunthorn said the Office on Homelessness hopes to have their information compiled in a few weeks, data will not soon be ready for public release. Knoxville’s numbers will not be released until HUD releases national numbers in several months.

“I think the extra effort this year will teach us additional information on who’s out there and what their needs really are,” Dunthorn said. “Kids are out there, young people are out there. We really want to reach them and help them get on the right path before it becomes a lifelong situation.”

Cline agrees whatever the count reveals, the ensuing effort will be all about rising to meet the needs of Knox County’s youth.

“We think we have a good idea, but you never know for sure until you ask the folks who are experiencing homelessness ‘what is missing?,'” Cline said. “The next step is, how do you build those services, how do you come together as a community and provide services to meet those needs?”

Want to hear more from Dunthorn and Cline about challenges in reaching homeless youth? Listen below: