Dr. Colin Sumrall of the department of Earth and Planetary Sciences held a lecture on Friday about the Paleozoic Seas, discussing how the creatures that lived in them used to use one another as “taxis” or living surfaces.

Sumrall emphasized the importance of studying ancient ecosystems in order to better understand our own modern ones.  He further explained that this task can often be difficult, as most of the organisms he discussed were extinct.

“If I were to give you an example,” Sumrall said, “If you don’t have a fossil record and I were to ask you ‘how big can a land vertebrate get’, you’d say an African Elephant… but with a fossil record, we know of vertebrates that are 10 times as big.”

The nature of a fossil itself is quite grim, according to Sumrall.  Should a fossil be particularly in good shape, it is very likely that the specimen fossilized was buried alive in that position.  On the other hand, it allows scientists a glimpse into the timing of events occurring.

Most of the lecture was focused on discussing edrioasteroids, one of the more commonly found encrusters in Sumrall’s study. They require a hard substrate for attachment, and rapidly disarticulate after they die.  They are effectively immobilized after they find something to attach to. 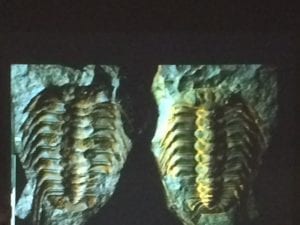 “When they glue themselves down, it’s like they’re using superglue, in fact, this is were super glue came from,” Sumrall explained.

Edrioasteroids were also studied to not overgrow members of the same species, but did overgrown members of other species. Because of the fact that they cannot move, they effectively spread through means of growth, often covering another unfortunate species.

The final part of the lecture discussed evidence to find epibionts, or organisms that live attached to others. Sumrall spent time across the world finding fossilized epidbionts and discussing their relevance.  After studying them for 30 years, he explains that he is one of the only people who studies the subject.

William Futrell, a UT student thought the subject of the lecture was interesting. “While this lecture really isn’t specifically for anything I’m doing, it allows me to know more about the living ecosystems around me and how ancient creatures lived in various places,” he said.

More information about these lectures and future meetings can be found here.

Tennessee remains perfect after going 3-0 at Round Rock Classic