Hundreds of people waited in line for nearly two hours to experience a taste of Stars Hollow at The Golden Roast Wednesday morning. Christian Academy of Knoxville students, UT students and other local patrons began lining up as early as 6:30 a.m. 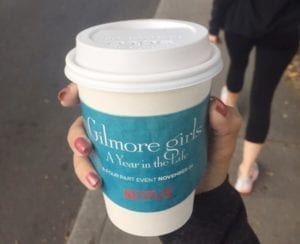 00 cafés were selected across the U.S. to host “Luke’s Diner” pop-ups to celebrate the 16th anniversary of the show, “Gilmore Girls” and its revival, “Gilmore Girls: A Year in the Life,” which will premiere on Netflix on Nov. 25. While The Golden Roast still looked the same on the inside, the employees were dressed in a similar fashion as “Luke’s Diner” owner, Luke Danes. Don Payne, owner of The Golden Roast, was dressed as Danes and impersonated him throughout the morning. He even occasionally took photos with fans.

The Golden Roast was the only selected coffee shop in East Tennessee.

Dressed as the character Rory Gilmore, Lainey Wise, 11, said she has been a fan of “Gilmore Girls” for a year now.  Wise said she is excited to watch the revival show. “[I want] to see if Sookie had a girl or a boy,” Wise said of one of the main characters.

Originally, only the first 100 customers that stopped by between 7-11 a.m. received free coffee. However, The Golden Roast employees extended that offer to all customers only buying regular coffee. Netflix, who is promoting the event, sent aprons, baseball hats and signs for the occasion.

“I got up really early, but it was worth it. I’m watching the show again right now. I have a quiz at 9, but sacrifices could be made today,” patron and “Gilmore Girls” fan, Sarah Payne, said.

“I’ve never watched the show, but I’m all for free coffee. I may start watching the show after this,” Ashley Ward, another attendee, said.

For more information on pop-locations, check out the Stars Hollow website.