UT’s adaptation of John Steinbeck’s novel “Of Mice and Men” opened this weekend at Clarence Brown’s Carousel Theatre. The play, directed by Paul Barnes, follows the story of two migrant ranch workers, George Milton and Lennie Small, and the struggles they encounter as they journey across California to find work during the Great Depression.

Trouble quickly finds the duo at a ranch headed by “The Boss,” but George is adamant about helping Lennie keep his strength under control and preventing him from doing anymore “bad things.” The play’s tragic ending is sure to tug the heartstrings of anyone unfamiliar with the novel and who know the story by heart.

“Of Mice and Men” is considered one of the great American classics in literature, and is often required for students to read. UT junior Shannon Michel has been assigned this novel three times in her 15 years of schooling.

“Every time I had to read the book, I really just didn’t like it at all. I never could get into it, and it just seemed like a slow read,” Michel said. “But seeing it on stage changed my opinion a lot. The actors made it very easy to follow the story and created very lovable characters, and I really enjoyed that.”

Donna Irwin, 64, has read the novel over 10 times and very familiar with the novel.

“This has been my favorite book for ages, and even though I know the story by heart, seeing it performed was a whole new thing,” Irwin said. “I knew what was going to happen but that ending still shocked me, just because the actors did such a good job at making me feel like I was hearing the tale for the first time.”

Due to popular demand, “Of Mice and Men” will run until Oct. 18 every Wednesday, Thursday and Friday at 7:30 p.m., along with weekend shows and added performances. 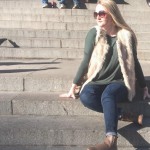