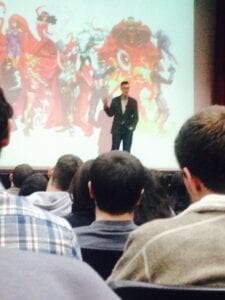 On Thursday, Feb. 19, Bill Rosemann, creative director at Marvel Comics, delivered a talk called “Marvel: Inside the World’s Most Heroic Brand,” in the University Center Auditorium.

The talk explored the history behind the well-known comic brand, as well as the business and creative aspects that has made the brand what it is today.

“If you see the Marvel Red Brick, you are in for a good time,” Rosemann said when talking about his work with the company.

“Tonight I’m going to be talking about something very serious; adults running around in costumes punching each other,” Rosemann said at the beginning of his lecture.

Rosemann said while Marvel seems like a source of entertainment, it reaches levels way beyond.

For Rosemann, comics were an outlet. Rosemann said as a child he moved around a lot and the one thing that stayed constant were comics. As a child, when he was asked where he grew up, he would answer that he grew up in the Marvel Universe.

While producing his college’s first comic book, Rosemann realized his love for comics was much more than a childhood hobby. His work in college led him to be associated with one of the most famous companies, working on projects such as “Guardians of the Galaxy.”

Rosemann emphasized that superheroes in comics are aspirational and inspirational, pushing us to keep the bar up, go higher, push all the limits. Rosemann said don’t sit back and passively read and watch, create. If you believe in your story then tell your story.

The talk ended with a message from Rosemann: simple acts change lives.

“Don’t be the Peter Parker that steps back, be the Spiderman that steps forward,” Rosemann said.