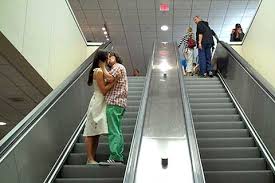 When a man and a woman fall in love, sparks fly. They cannot seem to keep their hands off each other. However, certain social standards affect what is acceptable and where. In the United States, couples hold hands, give gentle pecks on the cheek and lips and hold each other. However in Prague, couples take things up a notch or two.

A couple from Nebraska remarked on the public display of affection (PDA) as being a bit more intense than in the States.  Nearly everywhere you would look, a couple would be laying together, legs intertwined with their lips glued together. Not just a mere peck like in America, but full on tongue dancing. This behavior is not just in parks either. The American  couple also commented on the presence of the PDA in various parts of the city. They noticed it from the escalator in the mall, to the Charles Bridge and everywhere in between.

While this may make some tourists a little uncomfortable, it seems to be a trend completely acceptable to the population of Prague.

The affection is not just in the people, though. The statues and advertisements are more geared towards sex appeal. There are some art shops and galleries that display lovemaking statues in their windows to the people on the street along with much larger sculptures in parks depicting similar situations. The advertisements at bus stops commercialize women in scant apparel or simply covering themselves with their hands.

All in all, affection is certainly not hidden in the city of Prague. Couples are more than willing to express their level of love in public. Some in the United States may see this as offensive or discourteous to children and the public in general, but here it is a part of everyday life.