“Sovereignty is a definition you get to choose,” said Chad Smith, former principal chief of the Cherokee Nation.

As guest speakers at the 7th annual Native American Heritage Night, Smith emphasized that the meaning of the word is left for us to define.

“There could be no greater reward than you choosing your own path and finding it,” Smith said while discussing the idea of sovereignty.

“There’s very little that we don’t do,” Hicks said. “Being sovereign is guiding your own way.”

Citing the 175th anniversary of the forced removal of approximately 14,000 Cherokees from the region, the speakers highlighted the importance of learning from and understanding different cultures before passing judgment.

“If you count 40 steps outside that door, stop and think about this,” Smith said. “Indians are perhaps the only citizens who have dual citizenship. We are dealt as citizens as a dependent domestic nation.”

Hicks emphasized the need for people to meet others outside of their own culture.

“If you see someone who looks different, don’t make fun, but go up and meet that person,” Hicks said. “Always understand that other person’s culture and where they came from.”

A main point of conversation for the speakers was what UT and surrounding communities could do to stop Native American stereotypes.

“The more that this campus could do for cultural diversity and learning about other people, I think would be important for everybody’s education,” Hicks said. “Whether you guys realize it or not, there is probably as much or more history right here where you’re going to school than anywhere in the Southeast.”

Shante Olivers, freshman studying rhetoric and writing said, “Since America is influenced by so many other cultures, it’s important to know about and learn from those different cultures as well.” 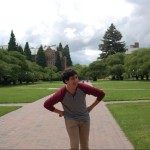