An illusionist and costume designer is still able to perform after his meeting with the City Council of Knoxville about an ordinance that bans wearing masks in public.

Justin Webb, street performer, has performed in Market Square for around three months. He dresses up as spiderman and ironman. Webb claims he never had any problems with the police until recently when KPD Officer S. Frazier issued a citation for wearing a mask. The citation has no detail other than the ordinance number, City Code 19-62, and the words “Mask (Spiderman).”

The ordinance basically states, no mask or other devices can be worn on public or private property.

“The ordinance is far too ambiguous. The way it’s written, it would apply to anyone. It could be medical gear, religious head dresses, even Vol fans with their faces painted orange. I just want my freedom of expression,” says Webb.

Vague laws give police discretion, making citizen’s confused on what the laws actually are. This meeting gave a better understanding of what people can and can’t do.

As Webb approached the stand he gave his thanks to the City Council members.

“It’s very rewarding and hopeful to see that people are willing to work for the common good for the small people. As small as we performers may be. You have my deepest gratitude whether it is opposed or approved. I appreciate it.”

The City Council approved for the ordinance to be removed. The law has been amended. He is now allowed to perform in full costume. He has to remove mask and show identification when asked.

“I think tonight showed, when you show them the proper respect, they will show it back. It is unconstitutionally applied. I am more than grateful,” Webb expressed. 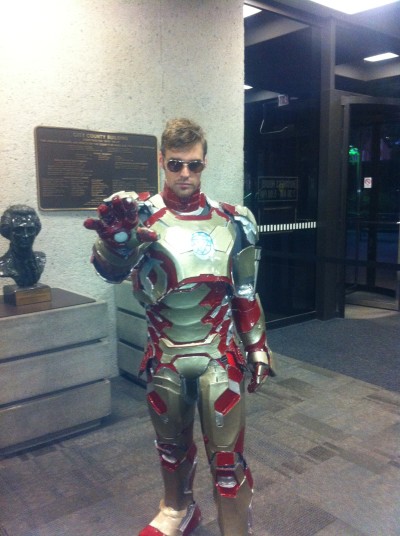 City Council members during the decision of approval or denial of the ordinance.