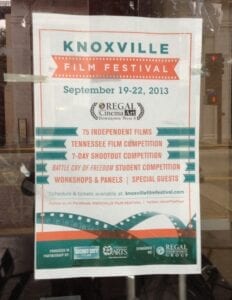 The films will be split into 20 different blocks as well as an opening film on Thursday night.  Tickets can be purchased for each block individually or a festival pass can be bought for $75 which grants access to every film.

There will also be a student film competition that viewers can purchase tickets to see. The judges range from a Scripps Networks director to a film studies professor from the University.

In 2004, Keith McDaniel hosted the first Secret City Film Festival, which grew in size and popularity over the next eight years until McDaniel decided to move the event to Knoxville where he partnered with Regal Entertainment Group.

The festival film schedule is listed below:

The Things My Father Never Taught me

Fear and Loathing in Apartment B

The One Who Loves You

The Race That Eats its Young.

The Children Next Door

Dreams of the Wayward

Noah’s Arc: The Rebirth of a Jazz Singer

For more information on the Knoxville Film Festival visit their website at http://www.knoxvillefilmfestival.com